Urine can affect the environment in negative ways, such as pharmaceutical pollution and eutrophication. Pharmaceutical pollution happens when people excrete the pharmaceuticals that their body could not digest. Eutrophication happens when certain chemicals in our urine enter aquatic ecosystems, causing an abundance of these chemicals in the ecosystem. These chemicals trigger extreme algal growth which can cause harm to aquatic ecosystems. Both of these issues are influenced by human urine and can lead to damage in ecosystems, but there are potential solutions for these problems.

Pharmaceuticals, such as prescription and over-the-counter drugs, are excreted by humans and often end up in water systems, creating environmental problems such as harm to aquatic life (Wagner). People cannot metabolize all the pharmaceuticals that they consume, and wastewater treatment plants cannot remove most of the pharmaceuticals that pollute the water (Eisenstadt, 2005). This leads to pollution of the environment and is harmful to ecosystems.
The effects of pharmaceutical pollution in aquatic ecosystems can be detrimental to the life of the ecosystem. Endocrine-disrupting compounds, such as estrogen, are harmful to fish and affect the reproductive systems of aquatic life (Eisenstadt, 2005). This can lead to a skewed gender ratio and reproductive problems, such as inter-sex fish and immature reproductive organs (Eisenstadt, 2005). As a result, this can adversely affect the population of fish, reducing it with each generation (Eisenstadt, 2005).
Anti-depressants and obsessive compulsive regulators also have a negative effect on aquatic organisms (Wagner). The chemicals in pharmaceuticals are a primary cause for other aquatic species disorders, such as premature spawning in shellfish, inability of fish fins to heal, and a lowered heart rate in daphnia (Wagner). Figure 1 illustrates the different chemicals in pharmaceuticals, and the amounts of these chemicals found in a sampling of fish taken from Chicago’s North Shore Channel.


Effects of Eutrophication on the Environment

The effects of this saturation of phosphorus and nitrogen can be quite drastic on water environments. In freshwater systems, the excessive phosphorus causes an explosion of nutrient levels which fuels the growth of algae blooms (Ocean Issue Briefs). Lake Winnipeg for instance, is experiencing eutrophication problems regarding a particular species of blue green algae (Lake Winnipeg Foundation). Now, Lake Winnipeg is labeled as one of the most polluted lakes in the world and much of this pollution is caused by blue-green algae (Lake Winnipeg Foundation).

As stated before, it is excess nitrogen that causes the algal growth in salt-water estuaries. In these environments, the algae blooms can take on a reddish-brown colour and are often called red tides (Ocean Issue Briefs). These blooms are toxic to many life forms and can cause a lot of harm to the inhabitants of the waters (Ocean Issue Briefs). Fish, seabirds and ocean mammals and reptiles can call be adversely affected (Ocean Issue Briefs).

Eutrophication in salt or fresh water also carries the risk of causing hypoxia (Ocean Service). Hypoxia is a condition where sections of water that suffer from eutrophication essentially become deoxygenated (ocean service). This deoxygenation occurs because immense masses of algal blooms use up all of the oxygen present in the water and cut off the supply for the remaining biomass (ocean service). This causes a variety of aquatic organisms to suffocate, creating “dead zones”, areas of aquatic ecosystems where there is no life (Ocean Issue Briefs).

The key to reducing eutrophication is to process the phosphorus and nitrogen before it enters the waterways (Larsson, 2014). In most of the United States, sewage goes through extensive treatment processes, where the sewage is fed to algae in treatment ponds allowing most of the nitrogen and phosphorus to be absorbed before it is released into the waterways (Tidaker & Jonsson).  However, even more benefit could potentially be achieved if the urine is separated from the rest of the sewage before it enters the treatment plant (Larsson, 2014). This idea has been proposed by the Rich Earth Institute (Larsson, 2014).
http://www.nature.com/scitable/knowledge/library/eutrophication-causes-consequences-and-controls-in-aquatic-102364466 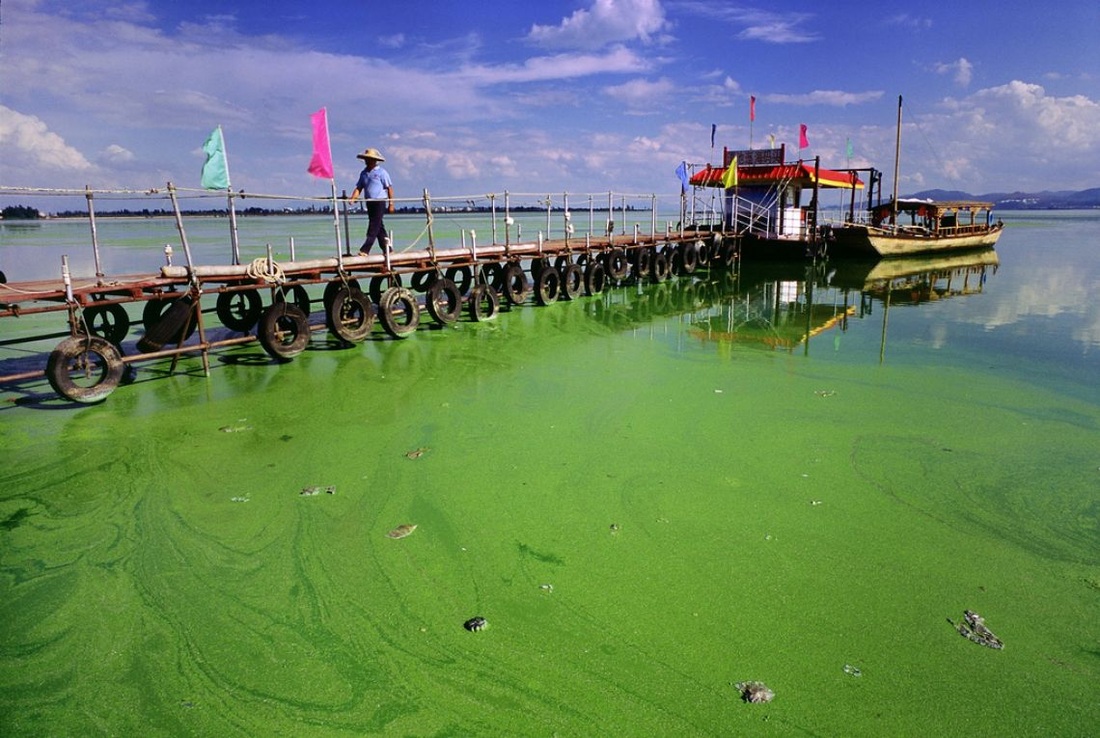